I worked out in the field doing real work for nearly 30 years and I’ve run into two different types of trades dudes in that time. There are the guys that buy the cheapest tools they possibly can, with the reasoning that somebody’s going to steal them so why bother spending any kind of dough. These guys will buy the kind of screwdrivers that you find at the grocery store, or the power tools that you will find it say, Harbor freight. The reasoning is not without some merit. I tend to lose things quite readily, and I’ve had really nice expensive power tools fail me.

The second type is tool snobs. They reason that since they have to use this tool every day they’re gonna find the very best that’s never going to fail, going to work well, and be a joy to use the whole time. I am in this camp. This is why I have in my traveling set of tools, and my tool chest in my garage, nothing but brand-name tools. My actual network gear is full of Channellock, Klein, and top name brands. Because I’ve learned long ago that those cheap tools are going to make me suffer until somebody steals them.

I have Klein and Channellock tools that I’ve used for nearly 30 years. That’s why I buy them.This is also why at home, I buy nothing but the best. To be brutally honest, I am a knife snob. When I first got married, I bought a set of Henkels knives. A paring knife, a 6 inch chef, and a 10 inch chef. These knives were razor-sharp. Sadly, I’ve lost a 10 inch, and an 8 inch chef’s knife. Both met their doom at the hand as of my ceramic tile floors. They broke, and then became really good vegetable knives, like a Chinese vegetable knife, before they were dropped again and became unusable. By the way, they were not inexpensive. A 10 inch ankles chef’s knife is going to set you back nearly a Benjamin. Probably more. And a pro tip is if you see Henkels international that’s one piece of shit built in China. You want the German ones. They are expensive and worth it.

So I’ve lost my big chefs knives, and my paring knife somehow grew legs and walked away. I don’t know if we took a camping and it disappeared, or my kids took it with them the college. No clue. But I did replace it, but not the big chef.By the way, here’s a shot of the one remaining knife I bought, the 6 inch chef, that I bought a 1991.

It’s still razor-sharp, and one of the best utility knives I’ve ever used. I pair that with a Wustoph boning knife, and those two pretty much take care of nearly everything I need to do in the kitchen.

But I’ve always wanted to replace the big chefs knife. I bought a very foo – foo 10″ santoko. It’s a Hammacher Schlemmer. It’s okay, but I find this steel is very hard, it’s tough to get a good edge, it keeps a pretty long. but it’s not but it’s not real useful.

So I’ve been coveting a big ass chefs knife. Enter the Victorinox chefs knife. I read a report in fine cooking magazine about chef knives. Most of them are simply too expensive for me to consider. But the Swiss Army a.k.a. Victorinox, was a mere 40 bucks. So what I did was buy this knife to see if I would like using that size chef knife again and if I did, I’d spring for the cool Henkels one. 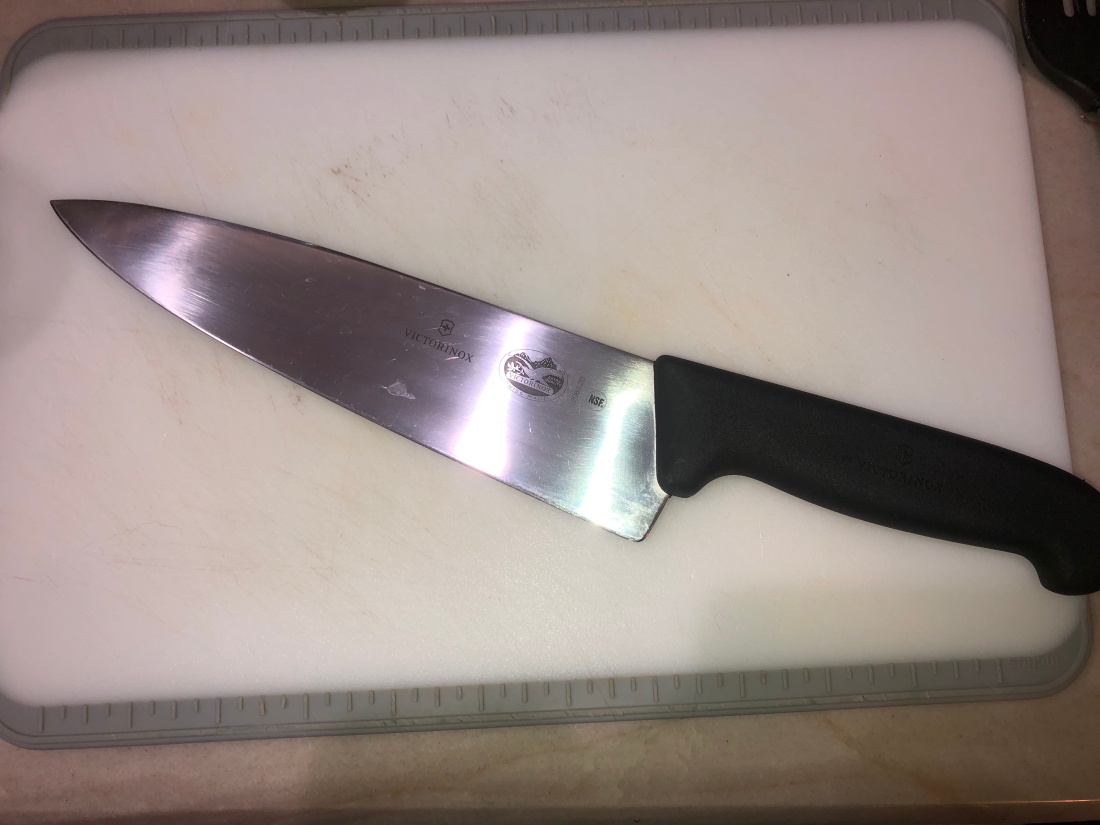 So this knife comes with a super sharp stainless blade.  It has a really comfortable and easy to use handle and a really wonderful shape for cooking. My one criticism is that the thin blade is not really shaped like the more higher end blades. It tends to stick on larger things like potatoes, cantaloupe, what not. It has a weird grippy feel to the cut.

But other than that the thing is fantastic. I love a large chefs knife and realized that I’ve really missed this kind of cooking knife. It’s so nice, that I’m debating whether or not the trade up. I probably will, because I am, after all, a snob.

It’s still a fantastic blade for the money. And what I will use it for in the end is those times when I find myself cooking with the Knights of Columbus or the Men’s Club at my Church. Nearly all the time, these Church kitchens have knives that are miserable. I’ll simply include it in my kit that use when I travel to go cook for someone else.

But I would absolutely buy one if I wanted to save some bucks for the same functionality.

PS – Amazon had a Henkels 8″ chef for $99. So I grabbed one. It’s a little rougher than I’d like, but still very, very nice. Every bit as nice as I remember.