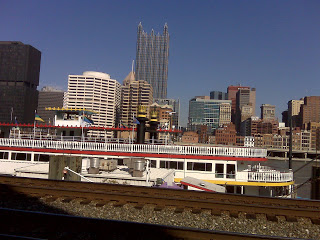 Pittsburgh is the second largest city in the state and is the county seat of Allegheny County. With a population of 334,563 at the 2000 census; by 2006, it was estimated to have fallen to 312,819. The characteristic shape of the city’s downtown is a triangular tract carved by the confluence of the Allegheny and Monongahela Rivers, where the Ohio River forms. The city features 151 high-rise buildings, 446 bridges, two inclined railways, and a pre-revolutionary fortification.

Pittsburgh is known colloquially as “The City of Bridges” and “The Steel City” for its many bridges and former steel manufacturing base.

While the Pittsburgh is historically known for its steel industry, today its economy is largely based on healthcare, education, technology, robotics, and financial services. The city has made great strides in redeveloping abandoned industrial sites with new housing, shopping and offices, such as the SouthSide Works. While Pittsburgh faced economic troubles in the mid 1980s as the steel industry waned, modern Pittsburgh is economically strong. In 2007, Forbes magazine named Pittsburgh the 10th cleanest city, and in 2008 Forbes listed Pittsburgh as the 13th best city for young professionals to live. The city is consistently ranked high in livability surveys. In 2007, Pittsburgh was named “America’s Most Livable City” by Places Rated Almanac. Furthermore, in 2009, Pittsburgh was named most livable city in the United States and 29th-most-livable city worldwide by The Economist.

All this is well and good, but my original thought when I got downtown was geez, what a puss-hole. Followed by repeating the line from the ramones visit to the Simpsons -over and over – “I’d just like to say this gig sux”…”Yeah up yers pittsburgh!”

To start off, like Denver, the airport might as well be in another state. The airport has more inside room than any other I’ve been. The walk to get out of the place was interminable. Seemed like getting from the gate to where I needed to be and back was an arduous journey. In reality it was like 1/2 hour.

My first trip here long go was for a wedding in bethel park. After a long drive we made a pit stop downtown to get film or batteries. This being early on a Saturday, nothing around, I double parked like one could do in any large city in America (it was a four lane one way street by the way). Some imbecile pulled up behind and started honking – causing me to acknowledge him by saying hello with my middle finger and counselling him to go around.

When I got here this fall I told my students about this and bragged that being on the east coast I could now use my best put downs – Puss-Bag, Douchebag, barf bag – and fit right in. Similar editorial comment would probably come to blows in Texas. I was told no, those would come to the same ugly end there and I better stick with the local term -“jag-off”.

I came though the pitt tunnel and had to manuever through downtown to get the to Hotel where my class was being held. Coming out of the Fort Pitt Tunnel from the airport is something else. Pittsburgh sports a pretty skyline, and it’s failry clean. As you approach and enter the tunnel you have no view of the city. So as you exit the tunnel it hits you all at once. Not unlike seeing the emerald city in the “wizard of oz”.

The novelty of the view wears off pretty quickly once you hit the city traffic, which is surreal. I’d call it the city of busses. They are all over the place, and move at a glaciers pace. Except, of course, when you try to go around. Then they lurch out in front of you with astonishing speed.

This traffic caused me considerable embarrassment as it took 45 min to get to my class the first day. In addition to the hideous traffic, downtown construction (can’t get there from here), and a bad sense of direction, I was completely foiled and frustrated. I kept facing one of a dozen bridges while trying to recall which one was the one I went over the previous day. I’m pretty sure it wasn’t one of the yellow ones. Turns out, there is a huge cliff where the Fort Pitt tunnel exits in the direction I needed to go. A huge cliff is a great landmark duh. The solution from my students was to take the “T”, otherwise known as light rail. Fair enough. Can I expense both a car, and public transit? I’m betting that would be hassle to explain although Google maps has public transportation maps and it looked easy enough. But in the end I demurred and drove my car every day. Deep down, I’m lazy and Taking the train would involve walking more than a few blocks. Besides, It was a cool car.

While Texas sports some of the fattest cities in the US, I would think Pittsburg is definately in the running. Most of the locals I ran into downtown were bucket headed, fairly large, or just plain ugly. La (city) del la fea. I walked around feeling like Robert Redford. They are a tough crowd however. While waiting for the valet to fetch my car I watched a mother trying to get her small daughters to a day care. She had remarkably bad herding skills, especially for a busy street. As she’s extracting daughter number two, daughter number one walked out in the middle of the free traffic lane – look mommy, cars!. So she dragged the kid back for counselling. Then as she’s walking the two across the street -jaywalking I might add- number two broke loose and almost got flattened my a lady driving way too fast, only to be dragged back my mamma bear just before getting hit. The driver’s reaction? A honk, and a single digit peace sign (hand thust) Didn’t think to slow down much.

The Hotel where my class was held was hideously expensive, and wouldn’t provide me any useful points, so I camped at the marriott. Turned out to be a good thing, given the staff. When I checked with the front desk on Sunday to setup the girl gave me a bland look and said “no one told me”. Uh…could you check?. Finally she gave up and handed me a card key. Go figure.

The next day, the card doesn’t work. the story that day? They only last 24 Hours. The next day, they gave me one that worked the rest of the week. That kind of service combined with all the events full of teen dancers and old folks would cause me to blow a blood vessel in my head. Especially since I can’t drink lately.

The pittsbugers have an accent that seems part Bawlmer, part Waldorf MD, part Chicago. Usually that kind of thing captivates me and I try to mimic it. Takes about a week usually to get it down. That one defeated me, except for the staccato cadence. That I could do. Seriously, how can you come to grips with “yinz gonna go down-air an getta jumbo?” (Are you guys going there to get a bologna sandwich?). To be fair, I didn’t run into enough serious cases to get a good handle on it.

To be fair, I enjoyed being in a city with a little character to it. Most of the cities I visit these days are sterile affairs full of chain restaurants and boring yuppies. Pittsburgh is one of those older cities with lots of ethnic variation and a deep character.

Why would you go there? I honestly don’t know. The two times I’ve been I had to go. There isn’t much to see, at least for more than a day or so. I didn’t hit any restaurants of note. Most of the places the locals suggested were of the diner variety and thus not worth the hassle of the long walk, rail trip, or getting my car back out of the lot and hassling with travel and parking in the city.

Hotel:
Marriott – Courtyard Downtown – Newish, nice, but haven’t gotten the cool media center upgrades yet. $22 a day valet parking, and the attendants didn’t snear all that much at not being tipped. Tough luck. At $22 a day they can suffer. 16′ ceilings were way cool, and they had a well stocked store and the staff was super nice.

The hotel where I held the class sported something I haven’t seen for years – A payphone. An honest to God payphone from the phone company! Fifty cents, local calls. Wonder if it ever gets used? 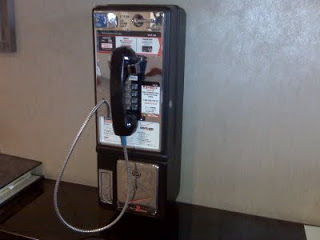 Car: 2009 Nissan Altima – silver,.very cool, very fast. Ran like a scalded dog, and had keyless ignition. Didn’t appear to use any gas. I flogged it like a demon in city traffic all week and spent a measly $13 on gas.

Flight – American Eagle was a mistake on the trip to. Small plane with stewardess like a cryptkeeper version of tom petty. Although I’m pretty sure she was or used to be female. Gave me the stink eye for hitting the head before they got the drink cart out. Far as I’m concerned, I’m on diretics so screw you I gotta whiz. The flight back was on a larger MD80 and wasn’t anywhere near as bad.