I grew up around men who fixed things. And fixed them properly. They showed me the way to do nearly everything, and started with the fundamentals. Things that if you get wrong at the beginning, everything else will be screwed as well. I thought of this as I watched my neighbors fence go up, replacing the old one felled by the storm a few weeks ago.

It was a painful thing to witness. Day one they had a crew of three, and a hammer. A single hammer between three guys to take down the two parts of the fence still standing. One attached to my fence at the rear and at the front, the part where I had replaced the posts. After awhile watching this in the camera system, I waddled out and lent them my 4′ crowbar and a sledge. Later in the day, I went out with some handy advice – Get a cordless drill. You aren’t going to beat or pry 3.5″ deck screws out of my brand new posts. Fundamental: Get the right tools for the job. If you are going to do this  work, get proper hand tools, a cordless drill, and a sawz-all.  I learned long ago do get the best tools I could afford. Even when I was just starting out, I bought the best I could get. FFS, at harbor freight, hand tools like crowbars and sledges are stupid cheap. I came back from a job one day when I was installing sound systems and handed my boss my tool belt to store in his office, so I wouldn’t have to carry it on the subway.  His eyes popped at  the belt I handed him, full of Channelock, Klein, and other high end tools.

Day two, the crew chief showed up, a beer bellied dude about my age. At that point, they looked like kids playing soccer, moving around as a group, for the most part. True, they had badly underestimated the job at hand. The fence apparently had been replaced at least once before, and there was a ton of extraneous concrete where they needed to plant posts. I could’ve told them that, as I found this out when I replaced two posts. Looks like there was a chain link fence at one point that they merely sidestepped when the last fence was installed. It took a lot of pain to deal with this. I suggested they rock up to Home Depot and rent a demolition hammer (an electric jackhammer). That’s what I had to do. The tubby dude complained they only bid two days. Seems correct. I’ve seen fence replacements (by people that knew what they were doing) and it took about that long. Fundamental: Never give a fixed price before giving a long hard look, especially on an older property. I told the dude he should carry a 1/4″ aluminum rod to probe the ground around fence posts to be certain. When it comes to installing physical networks, I never, EVER, give fixed price unless I’ve sized the job up, and also why I do not do residential. These days services like Thumbtack want you to quote sight unseen. I quote my hourly rate-always.

When they started building the thing, I noticed the tall section was really tall. Much more so than when I replaced the posts. Tubby dude said my neighbor said it was 10′. It wasn’t. It was 8′. I pointed at my new posts (That they had removed) lying on the ground and said “It was 8′. Those posts are 10′, and 2′ was buried. Undaunted they moved on. Here’s the issue – 10′ is against code and he’ll surely set my neighbor to catch the jaundiced eye of the city. The day is coming. Worse yet, I see no permit. I’m certain you need one. You need one for everything here. Fundamental: The customer isn’t always right about everything. See above about quoting. You could look at the thing and see it wasn’t 10′. Measure the SOB, and ask about a permit if you are contracting.

As they started building the fence, it became very apparent they had no clue. they started at the front, the high end, and worked their way back, using a line on the top as a guide.

What resulted was twofold – the cross-members are crooked as they tried to match the fence at the back of my yard (Why? Who knows!) and when they put up the planks they hit a spot where it’s 6″ off the deck, then drops to meet the back fence height. Looks like shit. Fundamental: Start from the known (my fence) and work back.

You know you want a nice corner, build that, then move forward to the new part. And, work from the bottom – the ground is a known. You put a plank on the ground as a level and spacer (to keep the planks off the ground – (they suck up water and rot) and let the top take care of itself (Tip: it’ll be level). If you want  a fancy header, you can bolt that on and trim. Easier to do on top than the bottom (where they covered the gap with 2x6s).

Later, one of the younger dudes, an dot-indian kid that tubby dude said wanted to get into the business, showed up with a retail grade compressor and finish nailer to fasten the bottom of the fence pickets to the 2×6 boards running on the ground. The exact, wrong way to do such a task. 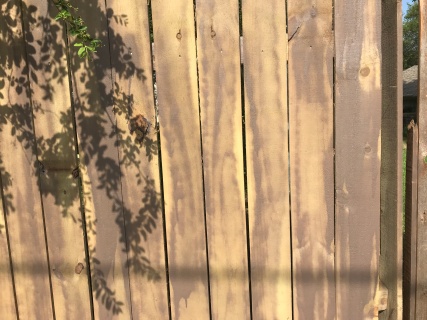 To make it worse, He showed up later to paint the fence with a pump sprayer you normally use with insecticide.

It looked worse than shit.

What finally broke me was turning out the driveway one day to see the same dot-indian kid painting the fence with a 2″ brush, one you’d use on trim. I was about to go back, get him one of my 4″ brushes.

Then I thought: Fuck this. Fuck them. They leave, I’ll fix the part I see from my  yard myself.

Here’s the point. Before you get started on anything, there a fundamental concepts you have to consider. And here’s the sadder point still, these young men could have and should have had mentoring to show them how the job is done.

But they didn’t learn that. All they learned was the pain of failure, if anything at all.