To be honest, I had no idea what this thing was called. I bought it cheap at Harbor Freight. and had to go look at the box to figure out anything about it.

Here’s the deal. I’m a tool snob. If it’s something I use a lot, or use professionally, I’ll buy the best. That’s why my telecom and NW toolkit is festooned with ChannelLock, Klein, and high end tools. They’ve served me well. Most of my high end tools I’ve had for over twenty years.

I have friends in the trades that have the opposite philosophy. Fully expecting their tools to get broken or stolen, they buy the cheapest they can. There’s some merit to this.

Enter into the picture, Harbor Freight Tools. This is where I go when I need something, and either want to try it out, or know I won’t use it much and don’t want to spend a ton of dough. In this case, I bought this sander to refinish guitars. I don’t do a ton of this, so I went cheap. I think this thing cost me about $15. Turns out, I didn’t need it at the time since the instrument I was working on polished up OK, and the next one in line is so screwed, I have to buy a new neck, which will come pre-sanded.

But, Finishing guitars is harder than furniture and I have some cool end tables to do, and the gear to do it. Although, I don’t think I’ll use my high gloss instrument lacquer on them.

At hand is my grandmothers end tables, which through a series of incidents, I’ve wound up with. They’ve been through a few people, and were hurting. 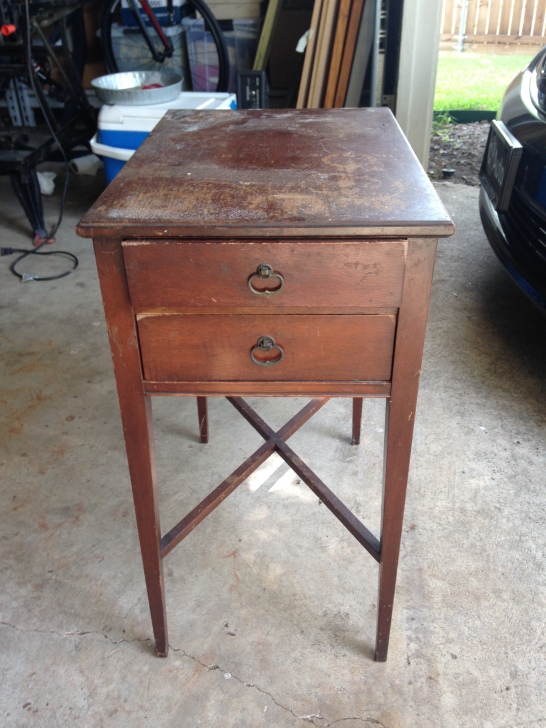 The other one has paint drops on it, courtesy of my oldest kid. So I hit them with the belt sander.

They are solid mahogany, from probably the first part of the 20th century. There’s no telling. Where there is veneer, it’s an astonishing 2mm thick.

Sanding this, I get the sweet smell of mahogany but also the hard candy and incense my grandmother kept in the drawers which is causing me to have flashbacks.

The mouse sander is working as it should, hitting all the places my other two sanders can’t reach, leaving me with very little left to deal with by hand.

So far, It’s worked flawlessly, since I found 220 grit pads at Home Depot that work great.

Here’s the deal. I don’t use some of these tools daily, weekly, or even monthly. If I did, I’d surely buy Dewalt or another pro series tool. But for this, the Harbor Freight tool hits the mark.

Keep tuned. I had an issue where I noticed a brace wasn’t glued any more and had to repair it. In a week or two I’ll shoot it with old school lacquer. They were reddish brown, and I have those dyes. So we’ll see. They should be stunning.