And when I moved to the new place, I passed along my 20 year old (or so) Weber Genesis to a friend, And now do strictly charcoal in a Weber Kettle, or wood in a smoker. I’m a big Weber fan, since they work well and you can get parts for the things, making them last indefinitely. I recently replaced the grill surface in my kettle with an improved version, which sports doors in the grill that allow you to add coals without disturbing your food. I think I have a total of $120 in the thing, all in, and it’s worked flawlessly.

I also read a number of fine cooking magazines and web sites. They have great recipes, but I can do without the PC crap. The first step is always “Start the coals using a chimney”, as if at my age I don’t know how to prep a charcoal grill. The theory is you won’t get any taste of the lighter fluid on your food.

For the record, although my taste buds are forever ruined by cancer, I can taste petroleum products. None of which I’ve ever detected when I start the grill urban caveman style by using copious amounts of lighter fluid. Typically, I arrange the coals where I want them, squirt a third of a bottle of lighter fluid on them, then “Flame-ON” as I enjoy a beer while the coals ready. Not.Rocket.Science.

But, what the hell. I’ll give it a shot, and here’s why – when I use the smoker , I find I need to keep some coals in the firebox to keep the heat consistent, and starting them in the grill and moving them is a pain in the balls. So I reasoned, maybe I’ll try a chimney. I used to use one long ago, but forgot when I gave up on it. Probably when I went propane. So I waddled down to Lowes and picked up a Weber Chimney. Long story short, I should have bought the cheaper one. Hell, I should have bought a big ass can of beans and turned it into a chimney.

I’ve used it three times so far, and the heat has beaten the crap out of the metal. Meh, for $14, I’m not expecting too much. However, my last one was painted black, and seemed ot last better.

So without further ado:

It works reasonable well. It manages to start enough charcoal to do a Weber Kettle justice.

You wind up with a well lit grill, and very hot, while retaining the vast bulk of the charcoal, allowing you to cook longer. Or rather, as long as you need. You seem to have plenty of coals for as long as you need. I did chicken last night, and had heat enough left to grill some zuccini.

Doing this, as opposed to starting the coals and letting the flames hit the grill surface keeps the grill part more or less intact. As opposed to overheating it and damaging the surface. Bad part is, it doesn’t burn off the schmutz from your last BBQ.

And if you empty it correctly (use gloves), You can get the coals where you want them without too much re-arranging. Even though I have BBQ tongs, the coals are nuclear hot, and moving them without gloves is tough. 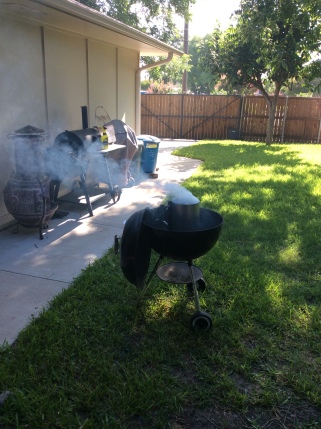 he back with tons of smoke. And it’s not nice “Hey, someone is barbecuing smoke.

It fills the back yard with a fog of acrid smoke. And if it’s near the patio, like it was the first two times I used it, the dog starts freaking out, goes round the house to the kitchen window, stands up, looks at my wife working at the sink and barks – “Holy shit the back yard’s on fire and I can’t get back into the house!”

Maybe it’s the quality of paper I put in it.

Here’s the rub, I don’t get a newspaper. So I use the newsprint ads I get as junk mail. But the smoke lasts long after the paper is consumed. So I guess that’s the other con – no paper, you have to hunt for something to start the thing.

It also has taken a mighty beating in the three times I’ve used it. The finish is burnt off, for the most part, and the grill surface that separates the coals from the newspaper is already beaten and rusty.

All in all, it has a slight edge, – hotter coals that seem to last longer (probably because they heat up faster). Another pro would be that the dog now stays in the house the whole time the grill is out. 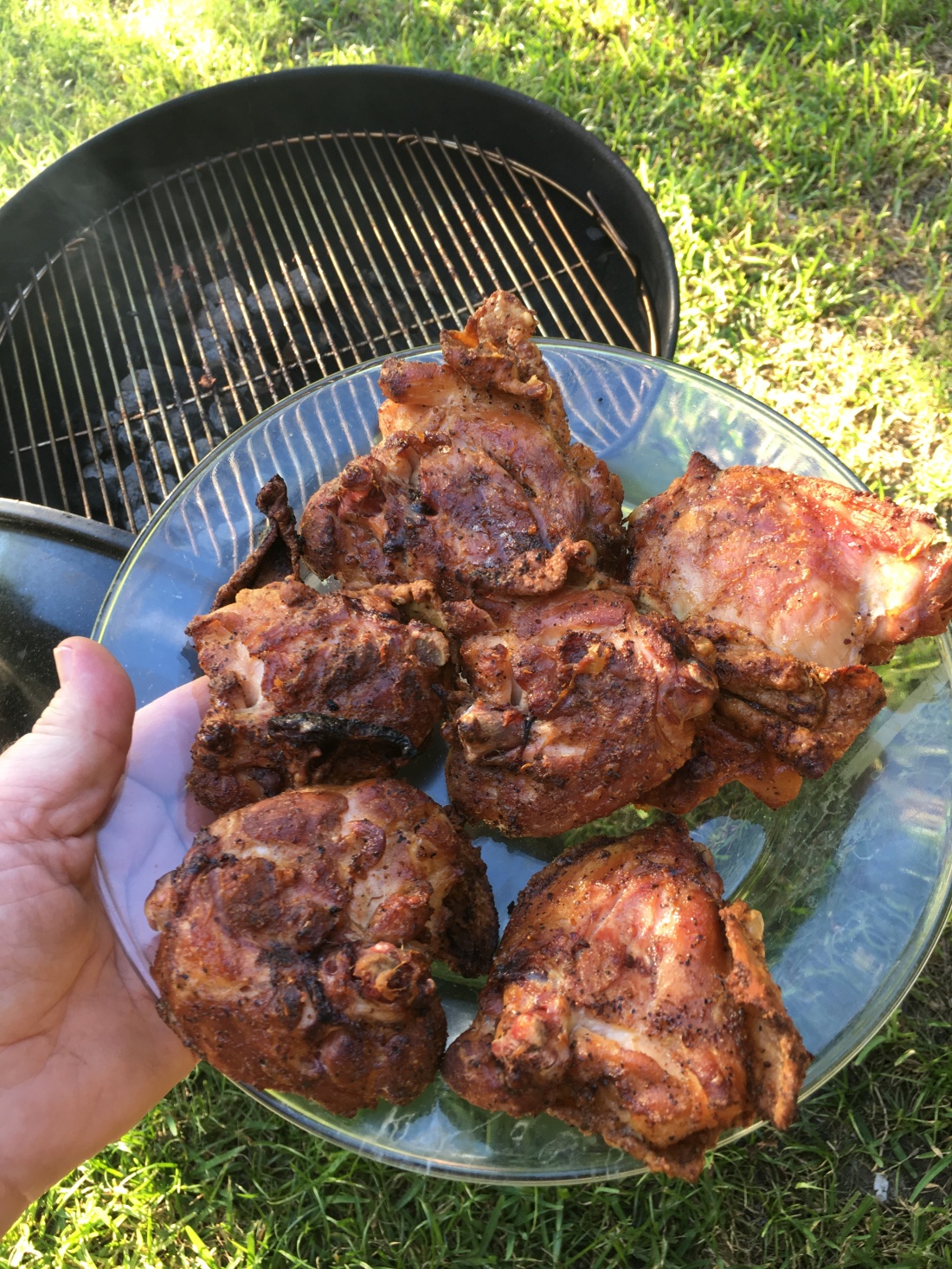