John Hughes passed away last Sunday morning after a valiant battle with Cancer.

Since then I’ve been thinking how hard it is to take the essence of someone’s life – who they are, and compress it into a blog or even a talk. It’s hard enough for most, but for John, the task is daunting.

When another friend, John Dunleavy, called Sunday morning we got to thinking way back to our first encounter with John. Deep in the back of my head are dim memories of standing on the playground at St. Michaels, some thirty – almost forty, years ago and seeing a group of rather rambunctious boys playing a game of “smear the queer” on the rectory hill. Since I was nowhere near the alpha-dog type, the thought of coming anywhere near that spinning vortex was unthinkable. I could envision having the football stuffed into my solar plexus, seconds before hearing “Your it buckwheat!” and being summarily pummeled.

On of my friends pointed out a number from the pack – “See that guy? that’s Mary Hugheses brother”.

I was familiar with the family, somewhat. Mr. Hughes was a mountain of a man that towered above people in church. Mary was short, with bright red hair. Up to that point I hadn’t heard of John.

Fast forward a few decades, an I’m chatting with my family. “Did you see Laura’s new boyfriend?” I generally didn’t think much of the sister’s boyfriends at the time. Not that I didn’t or wouldn’t like them, I figured whoever they dated was their problem. At the time, I was having my own issues, so other than whatever entertainment value could be had, I generally met the news of a new beau with a shoulder shrug. But Laura hung with an interesting crowd. So chances are the entertainment value would be high.

Soon enough we met. I don’t remember our first meeting but I’m certain there was an aspect of “Huh…he looks normal enough. Almost plain.” Certainly nothing there that would have had my mom clutch her chest saying “jeez..me beads”

One thing certain, he had some crazy stories of his past and the navy. Just when you thought that there was no way what he was saying could be true, He’d pull out the pictures. Whoa!

Over time, I came to simply take him at face value, since not only would he probably have the pictures, he probably had the T-shirt and video tape stashed somewhere as well.

He was gifted in the application of the “Guy Rules”. It was as if he had committed the entire code to memory. Years back one of my friends and I were visiting John, and he was showing off his latest toy. He spun some incredible yarn about having it buried in the ground from his time in the navy. So after a suitable amount of
admiration, we were on our way and my friend pipes up. “Does he really think we’re that stupid? That was brand new, they didn’t have them when he was in the navy”.

Yeah. But it’s still cool. An he was applying the guys rule, section 5 “When a guy shows you a new cool toy, you have to admire it’s coolness regardless of how he says he came to own it.”. Subsection 5A is – you can’t tell his wife about it either. Although I doubt Laura would have not known or cared. They didn’t appear to keep anything from one another. He also put into practice the guy rules that state when you meet a new girl and get serious you have to make a good impression (or at least try) on the Father and the brothers. A task that he set about (at least with the brothers) by pulling us into that vortex of energy. Not long after we met he let me borrow his new shiny camaro to take my then girlfriend (and future wife) camping. As I think back, I can’t imagine why he’d have done that, other than a big heart and a help-a-brother-out guy thing. I can’t recall asking, and I’m certain I wouldn’t have let him hold the keys to my hot-rod motorcycle as collateral at the time. So he must have offered. He even threw in an honest to God navy duffel bag to boot. A bag that I have to this day.

John was the real deal. In this age, especially in my field where most guys I’ve met are so full of themselves (and crap), John was one of the most genuine, real people I’ve known. What you saw is what you got.

He was also one of the most trustworthy men I’ve known as well. That’ll require some qualification.
John and Laura were truly birds of a feather. It’s as if God created these two people, and thought  – “Well. I’ve broken the mold on these two – might as well put them together. This created and even more powerful vortex of two combined free spirits. Most that know them probably had sometime in their life that they’d made plans only to find they were forgotten. More than a few times I’d be pecking on the door, and I’d hear someone say “I think they went water-skiing”. It got to be funny after a while. You’d shake your head and mutter – “Damn, I knew I should have called a few days ago”.
But when it was something important, something that mattered, He and Laura would be there steady as a rock. Usually with at least one of the more clear heads as well. I’ll leave the best stories to the people that have seen him in action, but I’m fairly certain if I had an issue, John would be front and center rubbing whoever’s fur the wrong way as hard as he could.

I once had a friend comment “Have you known John to do anything in moderation?”
Not really. John would be all-in or not at all. I don’t recall him doing anything half-assed. It was all chips in, redlining, or not on his radar, no matter if it was a small the task like grabbing your brother in law for breakfast. I remember being awakened early while staying at my Dad’s after moving back from Houston. I had gotten in late the previous night and John must have noticed the car out front. “Yo! You up? – let’s grab breakfast”. So off we went to the big boy in Annandale. The hostess met us, and litterally on the way to our seat, John somehow grabbed a plate from the breakfast bar and had it filled by the time we hit our seats. He announced we were going to the breakfast bar as he sat down to eat. He pauses eating, looks up and asks “Aren’t you going?” and in one fluid movement spied a drink cart, reached over and helped himself to a couple cartons of milk. I think I replied something along the lines of “I thought I wait to go until after we were seated”. His response was “They know you’re going to feed at the bar, why else would anyone come here?”

At one point he bought a Jeep. By the time he was through with it it had a more stout suspension, a winch that probably could have towed it up the side of a building, and a set of pretty agressive tires. God knows what he did to the motor. But one Weekend I piled in it with him and another brother-in-law -Paul for the ride of our lives to a gun show. Nothing like blasting down i-95 at top speed in a vehicle with the aerodynamics of a chicken coop. But, I’d look over and there’s John, the picture of calm seemingly keeping this wind buffeted monstrosity in the lane by force of will.

After he had a bad spill on his motorcycle, we were talking and it was clear he was diving into rehab with his normal amount of gusto. “Man, I’m a little sore. I was walking in pool for a twenty laps today” I told him something like why be a hero, take his pain meds and heal. The response was classic John.

“Dude, those things constipate you some kinda bad. You have no idea.My backs a little sore, I’m in some pain, but I’ve had two good [dumps] today. Life is good!”

It was this kind of energy, genuiness, that made him a favorite of all the neices and nephews. Before his accident, you’d see him at family gatherings with half a dozen kids attached trying to tackle him. Just like the ancient game of “smear the queer” only on a smaller scale. The midget version so to speak. He was the favorite uncle. I once attended a lecture where the speaker – a psychologist,  was talking about dealing with your kids. The one thing I retained from it was his advice to “Be real, kids can smell a fake”. Nowhere was this concept more on display. John was the no lie, high energy, real deal and they knew it.

Yet, I don’t think it was until recently that he understood the scope of that concept.

On the way back from a huge family gathering at the beach, we stopped by to visit John and Laura. John had just finished his first round of Chemo and was preparing for his operation. It was fun to catch up and re-hash a bunch of the old stories. He hadn’t seen our kids since they were small, and now they were teenagers. Even
though he’d lost a ton of weight and seemed more frail, He was the same old John.

Only smaller. And with inexplicably less gray hair.

After we returned home and the kids started back at School, Colin had an assignment to write an essay about someone he admired. He wrote a touching paper about John, and had me proof it. It required very little correction – just a little sandpaper to smooth out some of the more “embellished” stories. I told him we had to send it to John. Colin was reluctant, but said OK. So I emailed it off to John and Laura. I got a simple response along the lines of “Thanks for sending that. I was touched”

Later that year we met at the beach and chatted about that essay. He didn’t expect that level of admiration, I think it took him off guard.. I told him he had no idea the huge footprint he was leaving with these kids. He was their real deal hero and every one of them looked up to him in the same way as Colin. He seemed surprised and puzzled by the news.

He was simply being himself.

So this week our hearts are aching,for both him and Laura. Yes, we knew it may happen since he had been in this battle for a few years, but just because you know the blow is coming doesn’t mean it hurts any less. There’s a hole in our hearts, but our heads are full of memories that we’ll treasure forever.

He was our friend, an uncle, Laura’s husband, and my brother and we’ll miss him dearly. 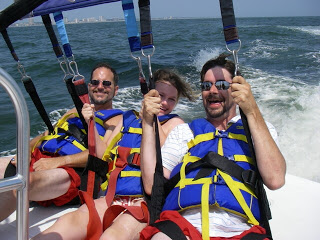